AN UNDERWORLD WITH AN UPPERHAND.

The three most notorious mob families are planning to unite, and the only fair way to elect the leader of their new crime syndicate... a good ol’ game of texas Hold’Em. The police catch win of their ploy and devise a risky counter-mission.

Enter Fox: an enigmatic agent who must enter the underworld undercover, posing as the card dealer. One slip up, and his heart will join the other hearts on the table.

As the cards are dealt, the bluffs transcend the poker table and only one question remains... Who’s playing who?

Based on a short video skit titled UNDERGROUND WORLD SERIES OF POKER, written by Dan Cannon.

All of the cast and crew grew up together in the small town of Colac in country Victoria. Filming took place over four freezing nights in an abandoned warehouse. The camaraderie was palpable.

As the American accents attest, we were heavily inspired by Martin Scorsese’s crime stories and Will Ferrel’s iconic brand deadpan comedy. The result is certainly... unique.

Admittedly, this film is the epitome of style over substance, but it was immensely fun creating an elaborate smoke-filled set and whipping our camera around on the jib, suitcase dolley and a DIY crane. In keeping with the palette of a deck of cards, we maintained a striking red and blue colour scheme throughout the film.

Rosco Brauer, who plays Lieutenant Smith, was a Colac plumber known for his hilarious speeches around the footy clubs. This marked his first foray into acting and paved the way for his starring role as Coach Leroy in our follow up feature film, REVERSE RUNNER.

Premiered at Colac Cinemas to 350 people. 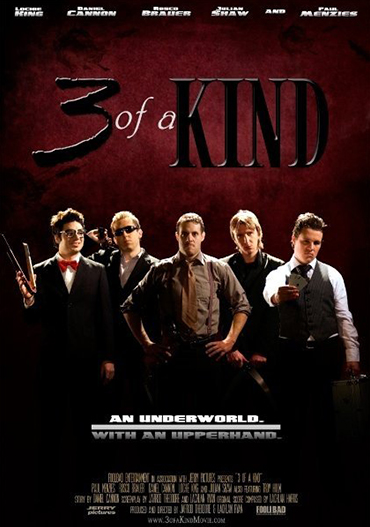